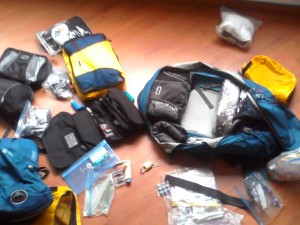 Image of the backpack and having to decide to to take and leave
when the backpack wasn’t closing and time was running out!

As with most things, I’m running behind! I wanted to start this blog with something I should have done before starting on my trip, talk a little bit about preparation for a trip that could take anywhere from 3 months to 3 years.

Eventhough I did some research and even shopping in advance, with the help of some very friendly “mules”  and eventual contributors to the trip, it seemed as if I had done nothing before with the overwhelming feeling of being swamped and unprepared for the trip! I left on a Tuesday night.

March 3rd. 10:56 departure time from Bogota to Manila. And here are some moments of my last hours in Bogota before leaving.

Monday March 2nd. 12 midday.
Some frantic moments were had in Bogota at this time that included me not having my passport and the US Visa I needed inside the day before the trip. I had renewed my US Visa which had expired, since I had a layover in the New York.

The same thing went for a compact computer I had ordered for the trip. No where to be found the day before the trip, but eventually it made it!

Tuesday March 3rd. 08:34
That morning, the guy who came to paint arrived the apartment, and the movers came to haul away some things, and slowly, but surely the apartment would begin to empty out. By four o clock when I had to return the apartment to the landlord, I was well behind Schedule, but as with everything in life, people understand and are comprehending! (I left the apartment around 6:30).

Tuesday March 3rd. 05:00.
I was still in the apartment having a situation with the bag that didn’t want to close. This was was the first time I was packing it. You’d think I would have done this before, right?!

Tuesday March 3rd. 05:48
After some, at the moment, life-saving advice from people present for this spectacle and having to remove some things, as I chose to do a trip of upwards of a year with a 45 Liter bag, I managed to close the bag. That felt nice, but it hurt to have to leave stuff out. But as I tried to pack no more than 3 of anything, for a trip that should be a total adventure.

Tuesday March 3rd. 07:35pm,
I was leaving the notary public’s office, eventhough I had planned leaving at 7pm for the airport. I was trying to flag down a cab in impossible Bogota conditions, and was lamenting not still having my bicycle I sold about an hour before…but one errand was done. POA done, mofo’s.

Tuesday March 3rd. 09:06pm
After some loving people took me to the airport and I tried to check in, I was met with some interesting news. Since I only had a one way ticket, the US was not going to allow me to fly to them.

Tuesday March 3rd .09:33 or so
After verifying that this was a fact, proceeded to search online and at counter with the help of Matias, for the cheapest, and furthest option way, available. I think it was 27th of January, there is a ticket from New York to Cartagena that may or not be used from NYC to Cartagena!

The trip itself was long, but not too bad….35 hours of travel through New York, Dubai and then finally Manila (must say that Emirates airline is a disaster with logistics of loading its planes,  but masters of being attentive to their travelers during the flight with over 400 movies, and shows, and endless music and drinks one would so desire.

After eating more and better than I had on my seldom upgrade first-class flights, my economy class, and cheapest option ticket I found took me from point A to point B.

After borrowing a pen to fill out forms, and asking someone to let me connect to their cell-phone hotspot to check my email and get the addresses for the accommodation options I was weighing.

After jotting down some chicken-scratchings on the back of boarding passes in blue sharpie, I went to try and find a cab.

After avoiding some scams for the cab ride I made it to some metered cabs and after the guy looked for the address he said he didn’t know where it was, we arrived at the place of my Couchsurfing host, but it was out of a movie…

I arrived at scary alley and a very dark house with a tin gate where no one answered, but a guy who worked at what looked like a 24-hour mechanic station down the block came over to help me find the entrance.

It was completely dark and no there was no signs of life and supposedly the couchsurfing guests of my host (who wouldn’t be there) were going to let me in…I felt bad it was after midnight the little dog in front of me would NOT stop barking and it seemed like a bit too much, for the moment, so…

I went the 7-eleven at the corner and went to see how much they thought a cab would be to my next destination.

After the more or less-2 dollar amount was suggested I went to the sketchy intersection to go flag down a cab between crazy looking jeepneys (stretched out and pimped out jeeps), bike cabs, and motorcycles were honking at me asking if I wanted a ride. Luckilly a cab with a probably 5-year old kid in the drivers seat stopped, not what I expected after midnight, but after asking how much he’d charge me he said I could pay whatever I considered fair. This could be a trick, but I liked the sound  of it.

The very friendly driver searched and found for the address and asked for a tip, for his son when he arrived, which I obliged.

After walking past a crazy looking gym inside some gates, someone told me to go to the end and take the elevator to the fifth floor.

I did just that, and when the doors opened and a reception greeted me I knew I had arrived.  A pretty special hostel in Malate with a pool overlooking the Makati business district of Manila. I opted for a bed in air-con 8 person dorm, over the fan cooled 18 person room. I’ve begun splurging…New York City good living, I suppose! 10 dollars well spent.

I was exhausted but I made it! and the trip had begun!

I will post pictures of the travels and soon posts about Manila and more pictures. Thanks and much love!

The Dominican Republic on a Budget