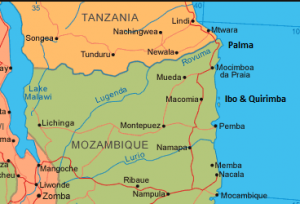 Traveling Northern Mozambique. When Mozambique is mentioned among travelers, you often hear to avoid the North. It has developed a reputation that sadly keeps people away from Mozambique in general. People say it is dangerous, but upon further questions people don’t know more than to repeat that they just heard that the North is dangerous.

After spending 3 months in Mozambique I discovered that this applies ONLY to The Northern most part of Mozambique near the Tanzania border, an area roughly 1% of the country. Imagine missing out an entire country, just because a tiny freckle of the territory sometimes has problems (information about this at bottom of post).

A good starting point for Northern Mozambique is Nampula. It is referred to as the capital of Northern Mozambique, and the third most populated city in the country.  From Nampula it is only around 4 hours to the coast and to one of the highlights of Mozambique, Ilha de Mocambique. Nampula is a major city that is a connecting hub. It has a very interesting Ethnography museum and a nice guesthouse called Ruby Backpackers Nampula.

Ilha de Moçambique / Mozambique Island  is a spectacular place and perhaps the highlight of traveling Northern Mozambique.  In a brief history and background of Mozambique,  this island was once the capital of Mozambique when the country was a Portuguese colony. 1500s-1975. After Independence the power vacuum that was left and interests of neighboring countries led it to a civil war that lasted between 1977-1992.

A bridge now connects Ilha to the mainland and it is charming with its colonial architecture dating back to the 1400s.
I found it to be a little like Zanzibar and has a big and impressive fortress. I stayed at Ruby Backpackers Ilha. Besides exploring the island, the favorite activity is to do a boat trip as the waters and beaches around Ilha are stunning! I enjoyed these trips so much, I did two! with Genito Magic Tours

The other highlight of traveling Northern Mozambique would be Ibo Island and the Quirimbas archipelago (Ibo & Quirimba island are a part of it).  Ibo is really special. It is an island with its own language and distinct culture. It looks magical with its fallen architecture and sleepy town feel. An interesting thing about this island and region is that women wear Musiiro, a traditional and natural face mask to protect from the sun and keep away acne.  I had the pleasure of staying at the really beautiful boutique hotel Miti Miwiri which was lovely with a swimming pool, beautiful design.

Quirimba island, is even quieter as it has less inhabitants and is a really lovely island paradise escape.
The color of the water is stunning and there are mangroves that are enchanting. There is a really nice family-run guesthouse on the beach with nice food called Mussa’s Place. It’s the type of place that you’ll plan on going for a night and spend 3 because it’s so beautiful and peaceful.

To get to the Quirimbas you have to connect through Pemba.  A quiet city on the coast that has a really nice and famous guesthouse and backpackers called Pemba Magic Lodge. While in Pemba, an interesting thing to do is to check out a neighborhood by the water called Paquitequete that feels like you’re on a remote island village.

To get to Ibo Island from Pemba you can take the public transport “chapas” around 12 hours (around $5) to Quissanga,  the coastal city where you can take a ferry 30 minute and around $1 dollar ferry across to Ibo Island, the main island of the archipelago. Another option is a shuttle service offered by Pemba Magic Lodge.

Conclusion
Northern Mozambique has a reputation that sometimes keeps people away from Mozambique in general, which is such a shame. It is one of the most beautiful countries with some of the loveliest people you will encounter.
It’s beaches and islands are an absolute paradise and cannot be missed! Especially if you are an adventurous traveler, I highly recommend traveling Northern Mozambique!

Tip:  Avoid Palma, especially north of it (The Northern most part of Mozambique near the Tanzania border). Unless you are going up north to Tanzania or making a border/visa run (where you have to leave the country to extend your visa), there aren’t reasons for travelers to go up there. There aren’t unique tourist attractions around it anyway. It is mostly an area where Natural Gas has been found and is being exploited which is linked to the violence around this area. If you want pretty beaches, Mozambique has an endless coast to choose without the risks.

Why is this area around Palma dangerous?  An Armed group that may or may not be linked to Somalia’s terrorist group, Al Shabaab operate in this area. From time to time they orchestrate attacks. Usually on local villages in raids for food and supplies. When they encounter resistance they end up killing the villagers and burning down villages.

Coming/Going from/to Malawi?
There are a few border crossings connecting Malawi with Mozambique. One of those is the Mandimba (Mozambique)/Chiponde (Malawi) border. If you are going from Malawi to Mozambique, after you cross the border on motorbike you can go get a “Chapa” or mini bus to the nearest city called Cuamba around 6-8 hours away. I recommend you spend the night in Cuamba, I stayed at the Hotel Castel which was great, and from there you can either take the very scenic train that runs once a week, or the bus that goes every morning around 4:30 am to Nampula, around 12 hours East.

The Dominican Republic on a Budget