Singapore, Singapore, Singapore.  Let’s begin explaining who or what is Singapore, as I am still trying to understand it myself after going for a few days.  First of all, it is a city-state. What does that mean? It is a country roughly the size of city. Apparently half the size of Los Angeles. Here is its flag and a map of where in the world it lies.

Singapore is a new country as it didn’t gain full Independence until 1965, and it has a history of being under British, Japanese, and Malay(sian) rule. Here are some facts and statistics about Singapore (courtesy of Wikipedia) that I believe will give you a bird’s eye view, and then I will tell you about my experience and perception of the country:

Singapore has a reputation for being a place that is modern, strict with a lot of rules ( chewing gum is forbidden:
https://en.wikipedia.org/wiki/Chewing_gum_ban_in_Singapore ) and the legal system has a custom of caning (punishment of beating someone for an offence with a bamboo cane!),  and even more scary: It is famous for being Expensive!  All of these things actually made me not really want to go in my initial plans, but it also has a reputation for being one of the best culinary destinations due to amazing food from all over the world. Since I found myself near and curious as always, I went.

As for my experience, I arrived Singapore and was going to meet my friend Tabea from Germany (who I had met in Indonesia) at the airport as her flight was getting in around the same time. In an amazing coincidence a wonderful couple of Stephen from Jamaica and Susanna from Italy,( whom I had also met in Indonesia) had told me they were also arriving in Singapore the same day, but I had no idea they’d be at the airport at the same time as I was.

Thanks to the marvels of free WiFi at the amazing Singapore airport, we realized this and were all able to coordinate and meet up (best part being that Stephen and Susanna ,met up with Tabea before I did, without them knowing each other before. I was able to guide them to meet with points of reference, descriptions, what they were wearing, etc) and soon I was re-united with 3 friends in a beautiful way and we all took the subway into the city to find a place to stay.

I was only in Singapore for 4 days, as it is an expensive city and even more so compared to South East Asia (and when you’re traveling on a budget as you’re trying to travel as long as you can).  Also, when I travel I like to experience the feel and culture of a country though its capital, but beyond that I much rather prefer to go to beautiful nature. Maybe it is because I grew up in New York City and have lived in big cities, but nothing excites me more than being in beautiful nature. 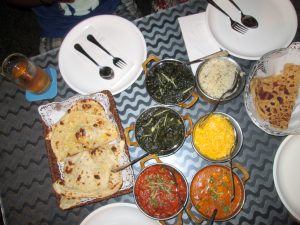 It had been years since I had Indian food, and the Indian food I had in Singapore was the best I have ever had.

My lunch of chicken curry noodles in red.

The light show with the Marina Sands in the back.

Absolutely beautiful views by the water in downtown
Singapore.

I was absolutely stuffed, but still ate this piece.

A few famous statues of a Singapore monument wearing my sunglasses. The monument is symbolic of Singapore as the monument is of an Indian man, a Chinese man, and a British man all standing in conversation .

My time in Singapore was a display of gluttony and culinary hedonism. I was like a mix of competitive eaters Kobayashi and Joey Chestnut all rolled into a ball of magnificent Colombian eating prowess. It was a stark contrast from a few days earlier where I fasted one day for Ramadan. In Singapore it wasn’t a matter of eating when I was hungry, but eating when I could eat

Honestly, I didn’t think I was going to like Singapore.  I just thought I was going to enjoy the food. But, it was a beautiful, well-designed and well-kept modern city with an amazing array of people from distinct cultures from near and far living and working harmoniously in this island city-state.  From Chinatown to Little India to Malay neighborhoods, these and the many other nationalities that call Singapore their home give it its essence. This mix of cultures along with their smells, sights, and flavors of this city will leave a fond memory.

Verdict: If you like nice cities, parks, or good international food you should definitely visit Singapore.

Wild hyenas in Harar and the Blue Nile Falls of Bahir Dar, Ethiopia

Danakil Depression, Ethiopia: Out of this world experience